Crib hour: What it is and why I’m not a fan

Related to naps, the concept of “crib hour” is this: if baby wakes up at any point under an hour from when they were put down, you leave them be. This is a popular option among some for lengthening a baby’s short naps… But, here’s why I don’t subscribe to crib hour.⠀⠀⠀⠀⠀⠀⠀⠀⠀
⠀⠀⠀⠀⠀⠀⠀⠀⠀
Certainly, if a baby is consistently having short naps (e.g. 30 minutes, every single time! Who can relate?! So frustrating!), giving baby a bit of time at the end of the nap might be a great way to at least give him a chance to go back to sleep on his own. But, if it’s been more than 10-15 minutes, we’ve got a couple of problems brewing:⠀⠀⠀⠀⠀⠀⠀⠀⠀
⠀⠀⠀⠀⠀⠀⠀⠀⠀
1. If it’s been more than 10-15 minutes since baby woke from his cat nap, it’s very unlikely baby is going to back to sleep at that point.⠀⠀⠀⠀⠀⠀⠀⠀⠀
⠀⠀⠀⠀⠀⠀⠀⠀⠀
2. If we’re waiting more than 10-15 minutes after baby woke up from his nap to get him up, we’re now well into his next wake window We don’t want to waste most of his awake time waiting for him to fall back asleep, only to have him never actually fall back asleep!⠀⠀⠀⠀⠀⠀⠀⠀⠀
⠀⠀⠀⠀⠀⠀⠀⠀⠀
If baby is consistently napping 45-50 minutes, then “crib hour” might make sense, because we’ve only got 10-15 minutes until that hour is up. But here’s the big problem with crib hour – if your baby is consistently only taking 20-30 minute naps, that’s 30-40 minutes, every single time, where baby is in his crib (likely upset) at the end of his nap, without any support (because crib hour suggests not going in at all until the hour is up), and, again, is unlikely to go back to sleep after the first 10-15 minutes anyway!⠀⠀⠀⠀⠀⠀⠀⠀⠀
⠀⠀⠀⠀⠀⠀⠀⠀⠀
Like any other sleep philosophy, crib hour certainly works for some families and not for others; but, it’s important to remember babe needs lots of support during sleep coaching, and we want to be really conscious of those wake windows and make sure there’s lots of time for food, play and snuggles during that time! ⠀⠀⠀ 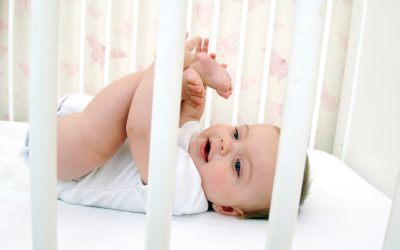 Safe Sleep for Baby: The ABCs of Infant Sleep

Alone, on their Back, in a Crib - this is what we call the ABCs of safe infant sleep, and it's how the American Academy of Pediatrics (AAP) recommends babies sleep, for the safety sleep possible for babe. 1. Alone: Baby should sleep alone, rather than in the same...